So is GrooveFunnels legit?

A lot of them, especially Softwares, are just “pump-n-dump”.

The creators create them, they launch the product, and then they never update anything, they outsource customer support to somewhere else (sometimes there isn’t) and a little bug that isn’t looked after, makes the whole thing go straight to the shitter.

The creator goes over to the next product, and so the cycle continues…

Why would GrooveFunnels be any different? Wouldn’t it just be “another ClickFunnels ripoff”? What is it so special about this particular platform?

In this article I’ll be going over why it is that GrooveFunnels is a legit platform and why you should highly consider its as an option, when it comes to all in one digital marketing solutions.

GrooveFunnels is an amalgamation of the ideas of some of the biggest minds in the online marketing industry and it was created, with the goal to replace and better, some of the current options that are out there right now.

One of the co-founders of the platform Mike Filsaime,  was originally part of another all-in-one marketing platform solution called Kartra. Things didn’t work out between the two creators, and Mike decided to separate from the company.

Before doing this, however, first he signed a non-compete contract that was to last for a minimum of two years. This is from stopping the company to take a hit, in case there Mike was to come up with something better (which was starting to brew).

Now that those two years have ended, Mike Filsaime is free to create an even better cheaper faster more effective and more modern alternative to kartra and to multiple other solutions that are out there, which is what GrooveFunnels is all about.

So Is GrooveFunnels Legit?

Well if being created by the co-founder of kartra, the creator of the very famous webinar streaming platform WebinarJam, and one of the pioneers in the digital marketing industry that has been around for 20+ years isn’t enough… let’s go over some of the features and reasons this platform is said to take over the industry in 2023.

GrooveFunnels has a ton of awesome features on its side and also has a bunch of upgrades coming its way in the future. Here are some of them:

All underneath one same roof, for a fraction of the price of every single one of the alternative tools put together.

But Let’s Say “Features” Don’t Do It For You…How About Some Numbers?

Anybody can splash out a ton of features and say that their product is amazing…so let me throw some numbers around to try to give it a bit more relevancy.

A simple fact, GrooveFunnels, now has multiple thousand paying customers that have gotten into the Platinum Lifetime Option.

These members (of which I’m included) are now a backer of the software. They have paid upfront a one-time price, to lock in all future updates of the platform, enabling the company to have access to a huge amount of capital to invest into the platform for future updates and tools.

This not only massively increased the value of the company, but also shows the strength of the product. It’s a really AMAZING product.

Quick note, and not to be biased…I’ve personally been looking for a product as good as this one…for well over 6 months. This thing is the real deal and even I bought it (which I usually don’t).

Apart from the thousands of customers, the GrooveFunnels Facebook group now has over 22,000 people in it, the refund rate at this moment in time is 0.8% (super low) they’ll have features and tools ready by mid 2020 (GrooveMember, GrooveMail) and end of 2020 (GrooveBlog).

They’ll also have other tools ready by 2021 (GrooveWebinar) a developer’s kit open source for you to add code to the platform if you are a developer, future Live Events like GrooveKon, marketing material, online training, services and much more.

There are people switching over their hosting to GrooveFunnels, they’re canceling their subscriptions (I’ve personally canceled my autoresponder), they are migrating whole websites, changing their funnel builders and so on.

So I think it’s safe to say that GrooveFunnels is legit. This isn’t just a fad, a “run-of-the-mill” software company or a pump-n-dump plugin. This is a real, possibly multimillion-dollar company in the making.

GrooveFunnels is an absolutely amazing platform that has been created by an even more amazing team.  It can substitute a lot of the other clunky and older very expensive subscription-based model tools that you might be using, at a lower price.

The platform is 100% legit. It was co-founded by one of the original co-founders of Kartra, Mike Filsaime,  who is also one of the Pioneers in the online marketing industry, has a ton of credibility, puts his heart and would into his work and knows that anything he touches, will be successful.

The platform, like we mentioned has thousands of customers, a massive market to get into, the tools are incredibly slick, powerful, useful and modern.

Features are going to be added up until the year 2021 and the platform is prone to take over and become the industry leader all-in-one marketing platform in 2023.

Products like these DO NOT come out very often, so make sure to grab it while it’s hot.

You can also get a free GrooveFunnels account by clicking on any one of the buttons on this page or bike heading over to this website here . 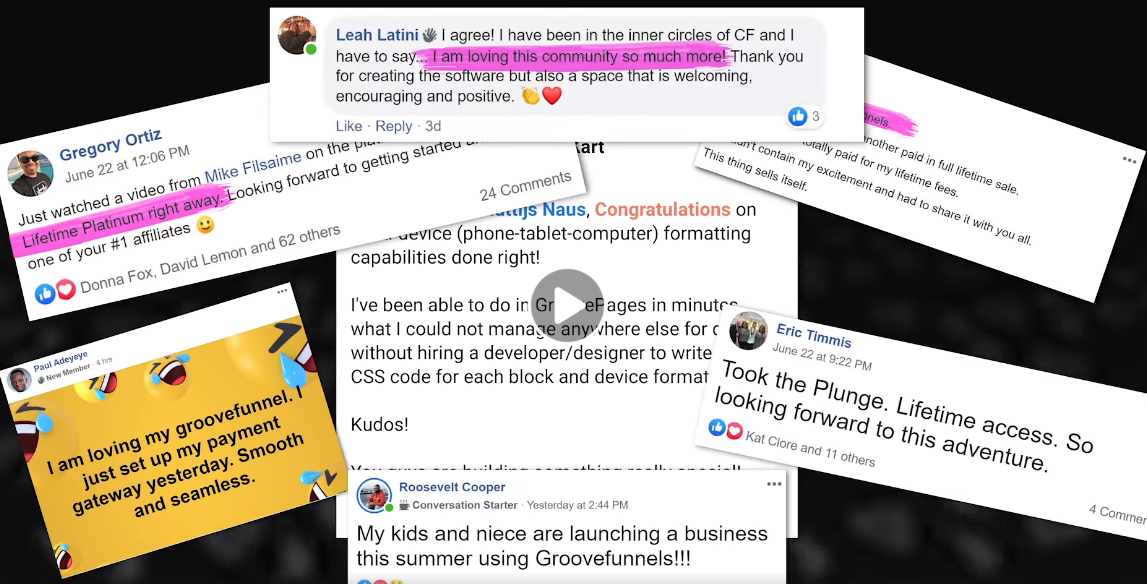